Direct from the West End and on the back of some tasty reviews, Nigel’s Slater’s Toast will be providing a 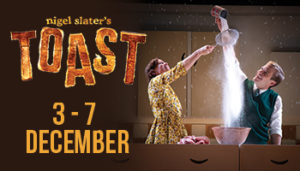 slice of quality entertainment for audiences at Crewe Lyceum Theatre from 3-7 December. Based on the British Book Awards Biography of the Year, Toast is based on Nigel’s award-winning autobiography.

Vividly recreating suburban England in the 60s, his childhood is told through the tastes and smells he grew up with and the audience with be enveloped by the evocative sights and sounds of cookery that defined the definitive moments of his youth.

“The audience can expect magic, the luxury of nostalgia and some fantastic surprises and treats that you don’t usually get at the theatre. It might be worth popping in a Kleenex as well, because there have been quite a few tears.” – Nigel Slater

Chef, food writer and journalist Nigel has been deeply involved with the production. Despite originally saying no to his memoirs being recreated for stage, he says his mind was changed after reading part of the script. He said: “I was completely blown away. I could feel the emotions; I could almost reach out and touch the people. I thought “This is going to work, let’s have a go.”

Nigel goes on to explain this moving and evocative tale of love and loss. 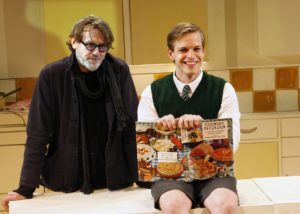 “Toast is the story of a little boy who feels abandoned because his mother dies when he’s very young and his father falls in love with another woman. The boy’s life suddenly changes with the arrival of a woman who’s completely different from his mother. It’s about learning to make your own way and gaining the strength to do something surprising at that young age, make big decisions about your life…

“There are so many children that have felt abandoned after a bereavement. There are so many children that don’t understand why this new person’s come into dad’s life or mum’s life that they have to accept. It isn’t just my story. Lots of kids have that emotionally tough time. I hadn’t realised so many people would come up to me, send me letters or write emails saying ‘That is my story. That happened to me.’”

Toast is part of a full autumn and winter drama season leading into 2020. After the exciting Christmas pantomime Peter Pan in December, the Theatre plays host to the chilling tale of The Woman in Black in the spring, as well as stunning drama Jane Eyre, renowned choreographer Gary Clarke’s ‘blisteringly fierce’ (The Herald) Wasteland, and the sensational Buddy: The Buddy Holly Story in July.

Also just announced is Willy Russell’s Educating Rita which embarks on a new UK tour in the spring and comes to Crewe in April.

This highly-acclaimed British comedy, tells the story of married hairdresser Rita and her life changing journey after enrolling on a university course and meeting tutor Frank, a brilliant academic and dedicated drunk who’s less than enthusiastic about taking her on. This hilarious and heart-warming comedy won the Olivier Award when it was produced in London’s West End and was adapted into the multi award-winning film starring Julie Walters and Michael Caine.


Made with by Wonder Media